The Italy-USA Foundation promoted at the Italian Parliament the new edition of the America Award; it is a prestigious recognition of great civil and institutional work. The award is mainly seen as a means to acknowledge and encourage initiatives and work aimed at favoring relationships between Italy and the United States of America. Prominent personalities of any nationality who stand out for their work and results in promoting transatlantic friendship will be considered. The 2015 ceremony was held in Rome at the Chamber of Deputies, on Thursday October 8, at 5 PM, with the journalist Michele Cucuzza. The Italy-USA Foundation, in the frame of the America Award, also conferred three medals of the Italian Parliament to the American students Samantha Abear, Stefania Rojas, Thomas Oswald Young IV, and a special award in memory of the singer Frank Sinatra. 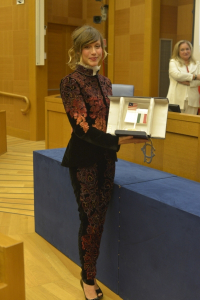 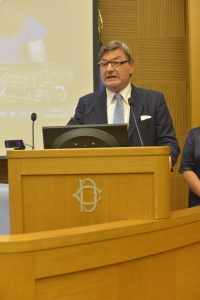 1776 Col. John Nixon gives the first public reading of the Declaration of Independence to a crowd gathered at Independence Square in Philadelphia